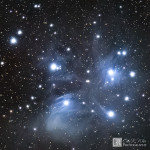 The Pleiades is one of the most beautiful open star clusters found in the winter sky.  It is easily seen by the naked eye even in light polluted sites and has a distinct “dipper” configuration.  Due to it’s prominence in the night sky it is an excellent and common target for the beginner astrophotographer.  In fact, while these images were not my first attempt at astrophotography, The Pleiades was indeed my very first target. END_OF_DOCUMENT_TOKEN_TO_BE_REPLACED 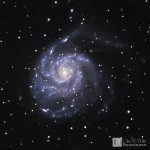 Last night we had unexpected clear skies.  The forecast called for partly cloudy skies, but as the sun began to set the remaining wisps of clouds in the upper atmosphere dispersed and much to my delight it was clear from horizon to horizon.  I kept glancing out the window as Venus and Jupiter began to emerge as twighlight took over.  Slowly, the brighter stars began to appear and as the sun’s glow to the west faded the fainter stars began to emerge… and still, no clouds in the sky.  At around 10:30pm as Astronomical Twilight ended (the time of night when it becomes truly dark) I set up my tripod and equatorial tracking mount in the back yard and sighted in on a target that I had not previously photographed. END_OF_DOCUMENT_TOKEN_TO_BE_REPLACED

After weeks of either clouds or bright moonlight, conditions finally came together for Astrophotography.  We had a clear night, with no moon, and I was eager to find and shoot my first Galaxy.  A common target for beginner astrophotographers is the pair of galaxies classified as Messier 81 and Messier 82.  They are located relatively close to one another and can be found by drawing a straight line from the star Phecda to Dubhe of Ursa Major and extending it again by about the same distance. END_OF_DOCUMENT_TOKEN_TO_BE_REPLACED