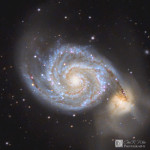 It’s been way too long since I have posted anything on my blog, and most of you probably have forgotten that it even exists.  For that, I apologize.  It’s been a very [insert lame excuse here] six months, and you all know how those things tend to go.   Hopefully, this post will end the drought and you will see more of my work from both this planet and beyond.

This has been a really challenging year for astronomy, with clear nights far and few between.  I have many acquaintances in this hobby and they too have been reporting terrible skies over the last year.  Despite these challenges I have managed to collect data on several deep space targets.  There have been a couple of lucky nights where it was clear all night long, but for the most part I seem to lug all of my equipment into the back yard, go through all the work of setting it up and get only an hour or two before the clouds roll on in.   Astrophotography, as a hobby can be compared to fishing.  You spend all morning getting out to your favorite spot, then cast line after line, only to lose your bait without anything to show.  That’s why they call it fishing and not catching.  Astrophotography is truly just an attempt to capture proof that beyond our little planet a marvelous expanse of wondrous worlds are scattered across the night sky.  I hope you enjoy the images that follow.

~Be sure to CLICK on each image for full resolution~

The Soul Nebula is found within the constellation of Cassiopeia and is estimated to be about 6,500 light years away.  It spans an area of the sky of about four full moons and is an area rich in Hydrogen Alpha, Oxygen III and Sulfur II.  It is an area rich in star formation containing cavities that have been “carved” out by radiation and winds from the most massive stars within.  Scientists have found that as you move farther out from the center of these cavities that the stars become younger, having been formed by the gas as it is compressed and pushed outward.  Found within this nebula is the star cluster IC 1848.  The Soul Nebula is adjacent in the sky to the Heart Nebula, which I will present next in this series, making up a double nebula target that has been called The Heart and Soul. 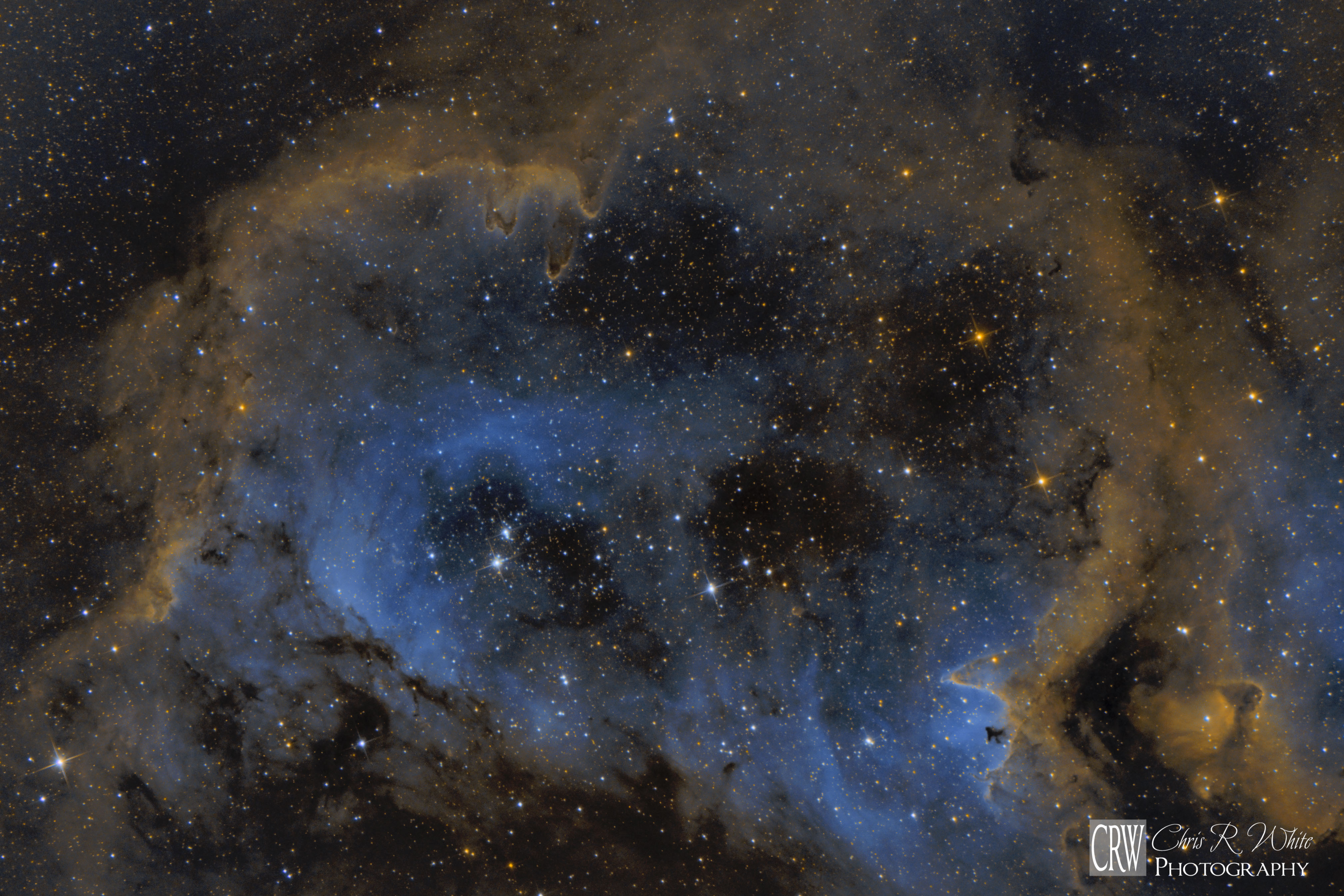 The Heart Nebula lies right next to the Soul Nebula, also within the constallation of Cassiopeia.  At the center of the Heart Nebula is an open cluster known as Melotte 15.  This bright grouping of stars contains several stars that are estimated to be about 50 times the mass of our own sun.  Despite appearing next to the Soul Nebula, the Heart Nebula is actually farther away from Earth, at an estimated 7,500 light years distant.  I find this area of the sky to be captivating, as these objects appear almost three dimensional.  Despite an ever changing canvas, they are so massive that in our life-times little will appear to have actually changed. 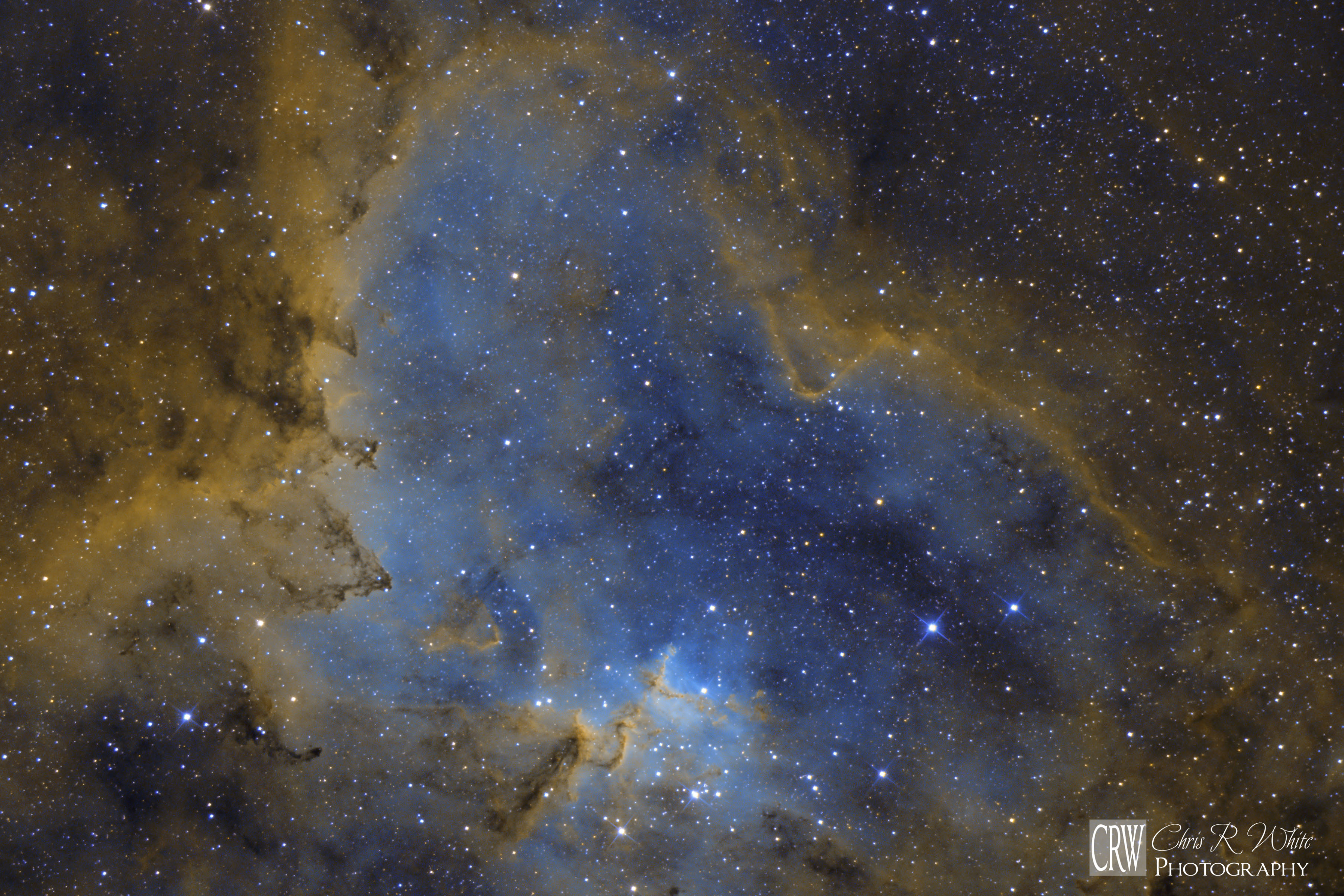 This beautiful nebula is one that I would like to spend a lot more time collecting data on.  The ribbons of purple reflection nebula against a backdrop of red emission nebula makes for a striking presentation found within the constellation of Auriga.  The Flaming Star Nebula is located about 1,500 light years away and it’s central star is believed to be a runaway star that at one time was actually located near Orion’s Belt. 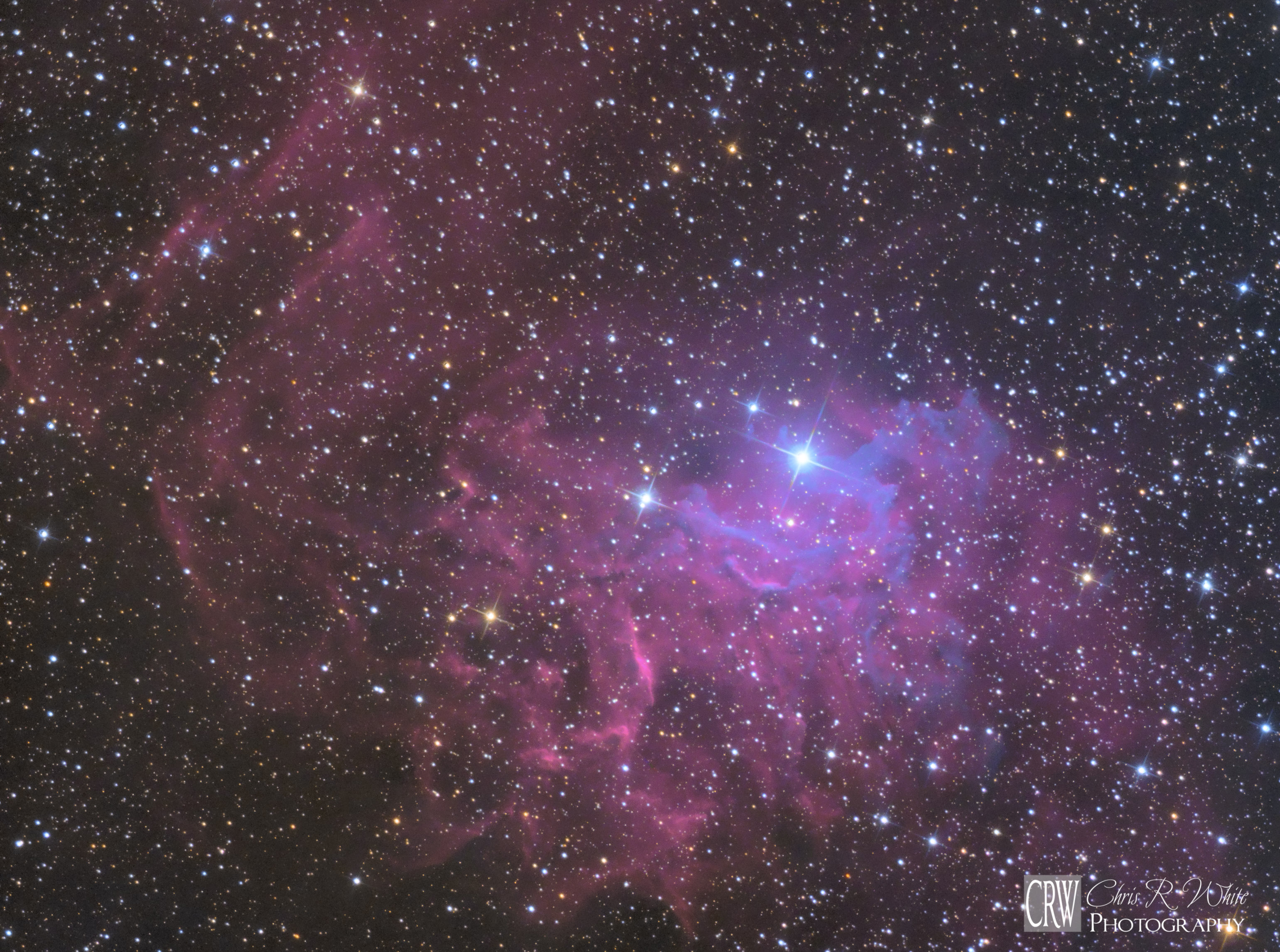 The Tadpoles are also found within the constellation of Auriga and are so close to the Flaming Star Nebula that they are often photographed together in the same frame.  In fact, when I first imaged this deep space object back in 2015, I used a camera lens and included both of these targets together.  This time, I used a longer focal length telescope, so I was able to resolve more details, but like The Flaming Star, I did not have very much time on this target before winter faded along with Auriga.  It was so cloudy this winter, that I managed to only get a little over two hours on each of these targets.  The Tadpoles Nebula, named  for a pair of tadpole like features, resides around 12,000 light years from Earth.  The Tadpoles themselves used to be pillars of cold gas, but over time stellar winds have eroded them into the shape they appear like today.  Sky and Telescope Magazine describes them as celestial wind socks, flapping in the stellar breeze. 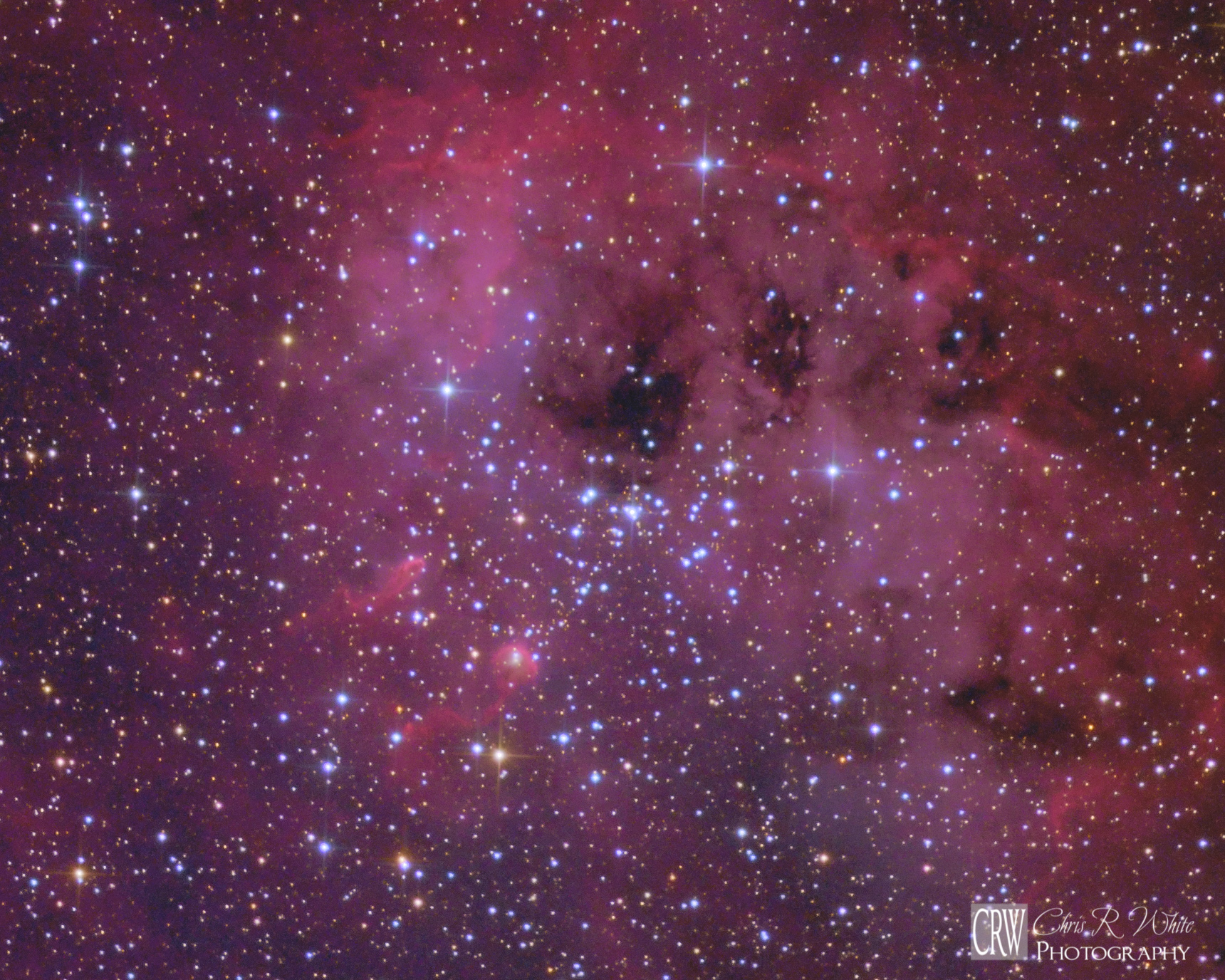 The Jellyfish Nebula is a supernova remnant approximately 5,000 light years away found within the constellation Gemini.  Essentially, a star extinguishes in a massive explosion propelling much of the material of the star outward in a powerful shock wave that rips through the surrounding space.  Gas has been swept up in an ever expanding shell, and in this case, formed into a remarkable intricate web to become in my opinion one of the most remarkable deep space objects found in the night sky.  While I can certainly see a Jellyfish in the pattern, my eye discerns the likeness of a brain.  As of this writing this deep space image is a personal favorite of mine.  I love the intricate webbing and the electric feeling conveyed by the image and I can imagine the violence and power that must have been generated during this cataclysmic explosion. 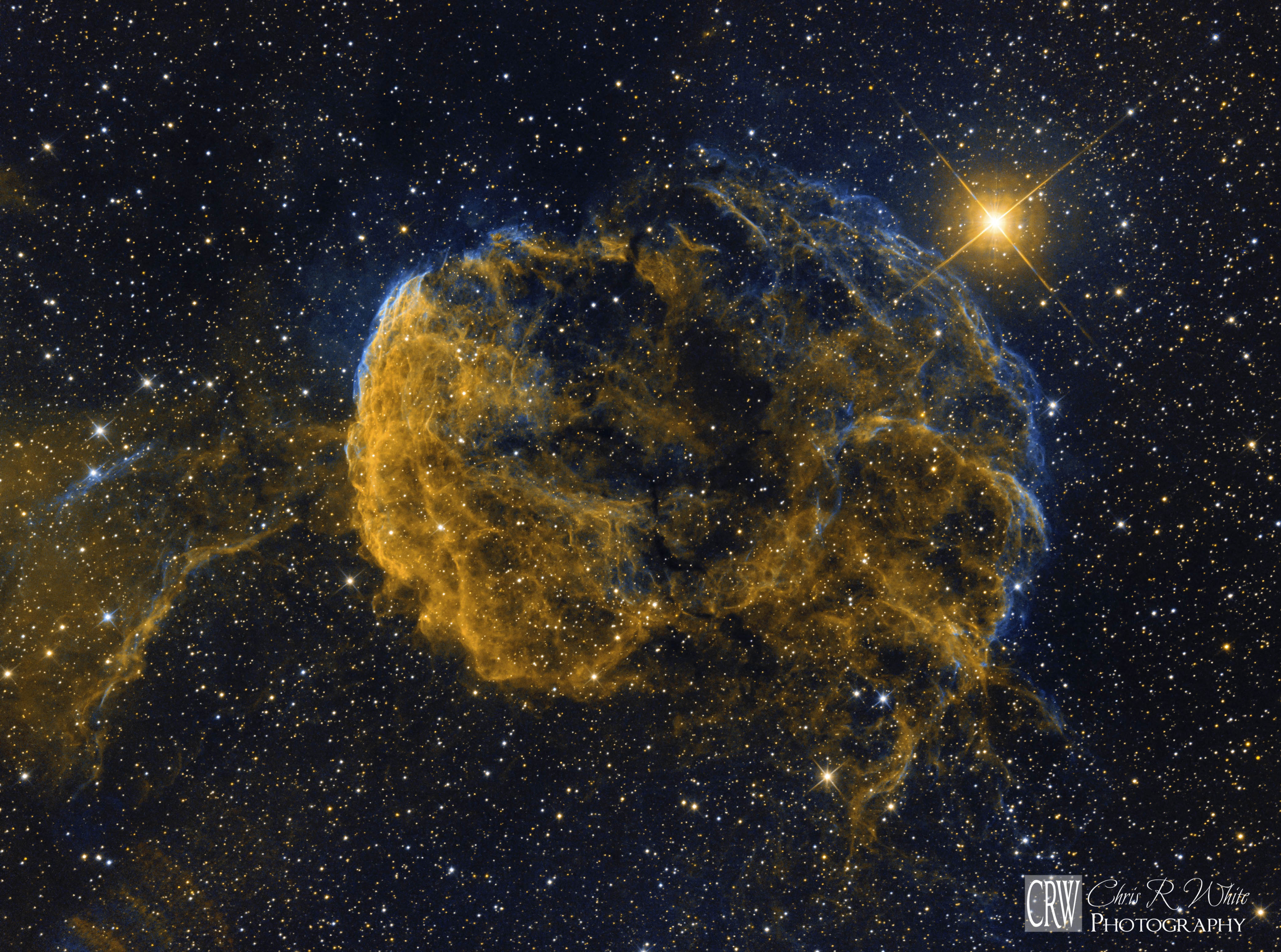 Bode’s Galaxy and The Cigar Galaxy- Messier 81 and 82

Spring is galaxy season.  During the months of March, April and May, there are very few nebula targets in the night sky, and certainly nothing large enough for the widefield scopes that most amateur astrophotographers image with.  That said, there are tons of galaxies to be found in the night sky this time of year.  Despite the sheer number of galaxies to be found during this season, most are very small making difficult targets without long focal length telescopes.  I have found that with terrestrial photography, including a bit of the environment with your subject can result in a more interesting and engaging image compared to a simple portrait.  Imagine a moose standing in the edge of an idyllic marsh edged with a boreal forest that fades into misty foothills with that of a close-up of the same moose with a completely out of focus background.  Including a bit of space around a galaxy can give some perspective on where this galaxy rests within the cosmos.  At least, this will be my official comment on this situation until I can get my hands on a bigger telescope.  M81 and M82 are a pair of galaxies located within Ursa Major and are located approximately 12,000,000 light years away from Earth and 150,000 light years apart from one another.  M81 can be found in the upper left of this image, while M82 in the lower right.  I originally imaged these two galaxies almost exactly two years ago, soon after my interested in astrophotography blossomed.  For me this provides a great comparison on how my skills have improved, both with capturing the data as well as my processing of the data. For comparison, you can refer to a blog post from two years ago where I first showcased M81 and M82.  2015-05-14 Astrophotography: M81 and M82 Galaxies  These two galaxies are engaged with one another as celestial dance partners, each impacting the other with it’s own gravitational pull.  Worth noting, is the visible red explosion emanating from M82.  This expulsion of hydrogen gas is believed to be the result of a massive explosion equal to the theoretical explosion of 7,000 suns. 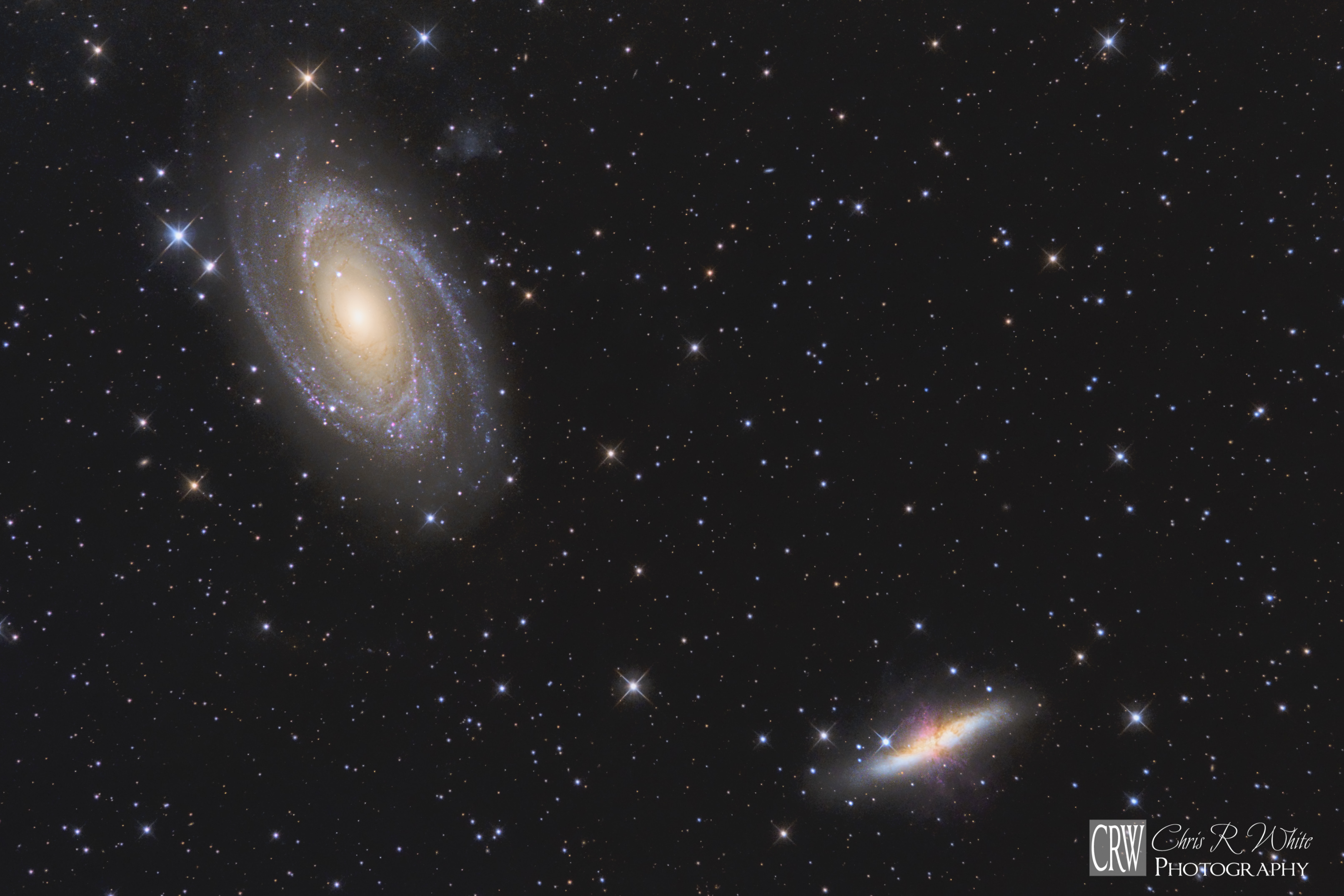 The Pinwheel Galaxy is a very faint face on spiral galaxy found in Ursa Major.  It is a very faint galaxy and of all the galaxies I have photographed, this provided the most challenge.  Being so faint, getting the details to emerge took a lot of processing, and early on I realized that the red blotches I had seen in other images of this galaxy were missing from mine.  The red blotches seen in the spiral arms are actually emission nebula and I needed to go out for an additional night with a special Hydrogen Alpha filter to isolate that signal so that when combined with my broadband data would bring this feature to life.  For me, this is the first image I have created where I combined broadband (red, green, blue) data with narrowband (Ha).  It took me five re-processing attempts before I was able to reach a balanced combination of the two.  I estimate that I have over twenty hours into the processing of this image, and even now, to me, this result is not quite ideal.  M101 is located about 21,000,000 light years away from Earth and at approximately the same size as our own Milky Way galaxy is about 150,000 light years across.  This is one of those targets that makes me really appreciate how vast space really is.  It took 21,000,000 years for the photons I captured with my camera to reach Earth after being emitted from M101!  To put that in perspective, it only takes light from the sun a little over eight minutes to travel the 93 million miles from the The Sun to Earth. 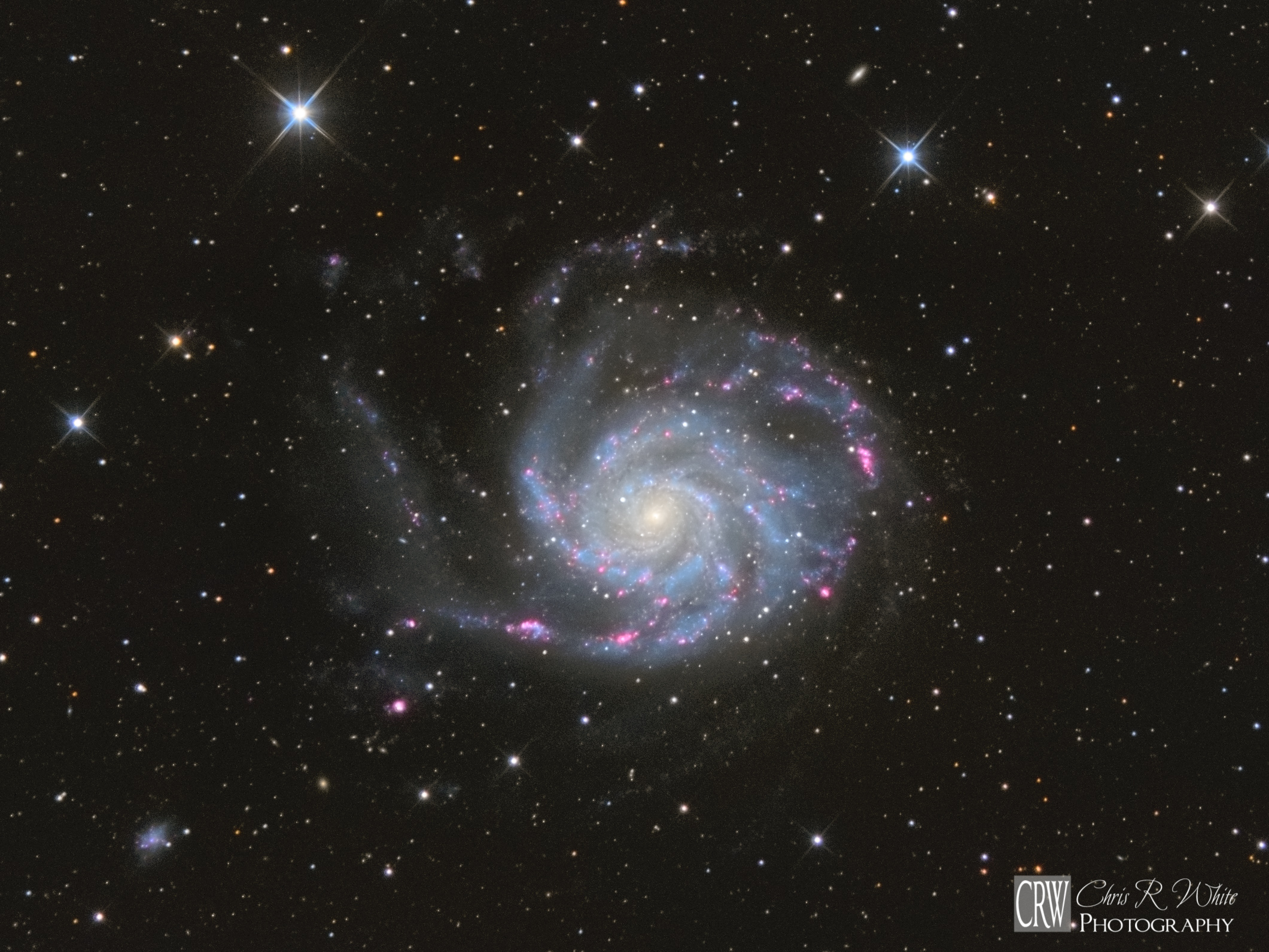 The Whirlpool Galaxy is a bright and beautiful spiral galaxy found in between Ursa Major and Canes Venatici.  It is the smallest (apparent size) galaxy that I have imaged, and because of this small size I almost decided not to make the attempt.  I’m really glad that I didn’t pass up this little gem as it has turned out to be my favorite galaxy so far.  The details in the spiral arms are mesmerizing and the bright tail adds a unique feature that sets this apart from other face on spiral galaxies.  It is estimated to be about 25 million light years away and is the most distant deep space object I have photographed to date.  I consider this image to be a work in progress, and if the weather will cooperate, I hope to collect several more hours of broadband data as well as Hydrogen Alpha before it passes too far to the west as Summer approaches. 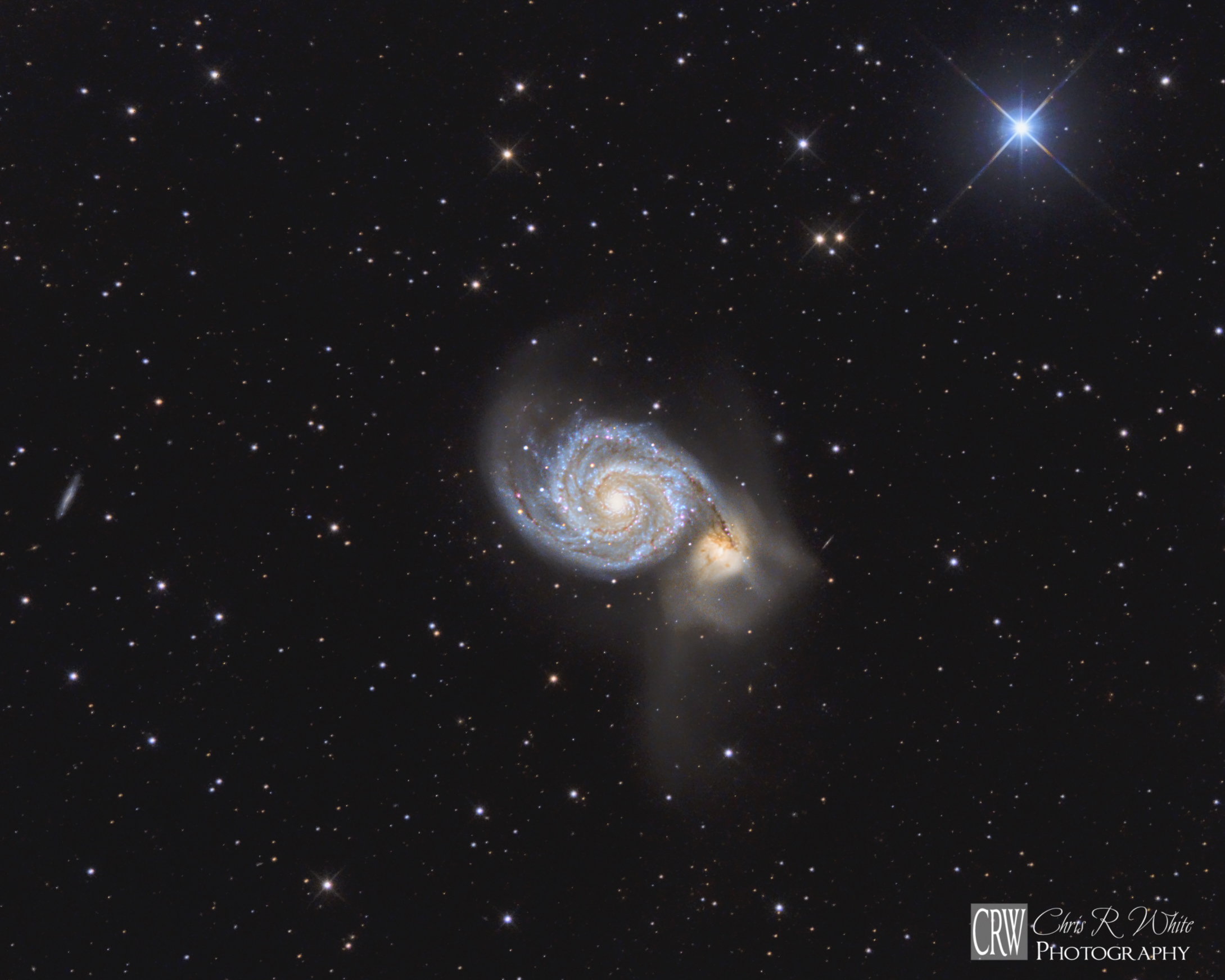 The North American and Pelican Nebula