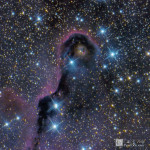 I previously imaged this deep space target back in the summer of 2015.  I was using a modified DSLR camera with a camera lens on a basic tracking mount, and not a whole lot of knowledge on what exactly I was doing.  At the time I was quite pleased with the result, although my interpretation of this target was not nearly as appealing as many of the other image I have seen.  This summer I decided that I wanted to upgrade my imaging equipment.  DSLR cameras capture all three color channels (red, green, and blue) at the same time, and give the photographer very little choice over which types of signal he or she wishes to collect.  DSLR cameras are also inherently inefficient at collecting the faint signals that dominate much of the night sky.  After all, when we look up at night with our eyes, the backdrop of the stars is primarily black with the exception of some features of the Milky Way when observed at dark sites.  One of the biggest drawbacks of imaging with a DSLR is that there is a fair amount of noise present, introduced by the electronics at the time of capture as well as thermal noise created by the heat generated by long exposures.  While the astrophotography community is small compared to mainstream genres of photography, there are many clever companies out there that make equipment designed to overcome the challenges I have just described.

I decided to purchase a dedicated astrophotography camera produced by the company ZWO.  This Chinese company is a pioneer in budget minded consumer cameras designed for imaging the night sky.  I settled on the ZWO ASI 1600MM-Cool.  This camera has a 16 megapixel micro 4/3 CMOS sensor (smaller than my DSLR) that images in monochrome and has a built in cooling module to combat the thermal noise generated by long exposure capture.  Additionally, because this camera has been designed for capturing faint signals, the noise generated by the electronics is also very minimal.  With such low noise characteristics it does a marvelous job at capturing the faint signals emitted by deep space objects.

Being a monochrome camera, the sensor does not have the bayer matrix that DSLR cameras have, and as such it is much more sensitive than traditional cameras.  To generate color images, special filters must be fitted in front of the sensor to ensure only specific wavelengths of light are passed through.  In the case of this image I used red, green, blue, and luminance filters and captured each of these color channels separately.  Once I had collected all the data I needed, I used software to combine the channels to create a full color image of The Elephant’s Trunk nebula.

The Elephants Trunk Nebula is located within the constellation of Cepheus.  It is part of a large emission nebula complex located approximately 2400 light years away.  The trunk itself is believed to be an active star forming region with relatively young stars that are only a hundred thousand years old.   These do not sound like very young stars, but when you consider that a star lives to be a couple billion years old, 100,000 years is indeed very young.  If these stars were humans, they would only be about 1 to 2 days old.  IC 1396 was discovered in 1893 by E. E. Barnard.