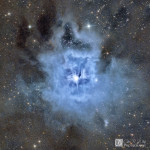 I’m not generally one to complain, but I cannot resist mentioning that this summer has been a lousy summer for astronomy.  Until last weekend it had been over two months since we had a truly clear night that coincided with a small crescent or new moon.  We have had many “close to clear” nights, nights that the forecast promised to be clear, when in reality thin layers of high altitude clouds obscured the stars just enough to make imaging impossible.  Last weekend, the streak was broken, and we had three nights back to back where imaging was possible, and the moon was just barely out of the new moon phase, it’s illuminating contributions minimal, to the dark night sky.

All summer I have been waiting for the skies to clear so I could spend some time imaging the Iris Nebula.  The official designation is NGC 7023, and it is located in the Northern Sky being positioned almost straight up this time of year making it in a perfect position to image with minimal atmospheric disturbance.  In addition to being a beautiful object in the night sky, the Iris Nebula also represented a real challenge for me.  The Iris itself is very bright, however it is surrounded by very faint dust clouds and dark nebula, comprising of a scene with a very high dynamic range.  Camera exposures would need to be short enough to ensure that the iris itself would not be over exposed, while long enough to be able to differentiate the dark dust from the backdrop of a slightly darker space.  Also, because the dust around this object is very faint, I knew it was going to take a lot of integration time, or in layman’s terms, I would need to spend many hours capturing enough images so that when combined, the images revealed the details unseen by the naked eye or even that of a single exposure. 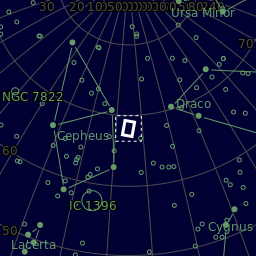 The Iris Nebula is located within the constellation of Cepheus the King.  It is located an estimated 1300 light years away, and is an estimated five to six light years across.  It’s apparent size in the night sky is about 15 arc minutes in diameter, about one quarter the size of the full moon.  The Iris itself is a reflection nebula, composed of interstellar space dust that is illuminated by a nearby blue colored star.  The Iris is named after the flower, with it’s folds resembling the petals of an Iris.  Personally, I like to think it is named after the other Iris, the one found in the eye.  It is as if there is a window in space where a being is peering back at us as we peer out into the universe from the tiny spec of dust we call Earth.

This image was created by capturing exposures over the course of three separate, back to back nights.  The first night was August 6th.  The forecast predicted clear skies, with intermittent clouds, and it was right on.  Every half hour or so thick banks of clouds would roll in, obscuring the stars for a short while, and then moving on.  Eventually clouds moved in around 3:00am and did not clear.  I had to babysit my equipment due to the intermittent clouds and over the course of the night I was only able to capture 2.4 hours of 240 second exposures.  The second night, August 7th, started out cloudy, but as we approached midnight the clouds thinned and eventually cleared.  By midnight I was in business, and was able to collect 300 second exposures all the way to 4:15am when the brightening eastern sky ended my session.  After two nights, I had 6.5 hours of data.  August 8th was the best night of the three.  It started out clear and stayed clear all the way to dawn.  This third night allowed me to capture almost 5 hours of exposures totaling 11.2 hours, over an hour beyond my target goal of 10 hours.  After three all-nighters I finally had the data I needed, or hoped I needed to create a composite image of NGC 7023, The Iris Nebula.

Collecting the data was my first challenge to creating this image, but certainly not my last.  Due to the complicated nature of the scene, I had to push beyond my comfort zone with the editing software, learning new tools and techniques that I had not previously needed for other images.  This trial and error editing method took me almost 8 hours of repeated processing, discarding and redoing to get close to the image that I had envisioned.  I even completely deleted two finished products, as I was certain that I could do better.  I can state with certainty that astrophotography is the most frustrating genres of photography that I have aspired to, but at the same time, it is also one of the most rewarding.