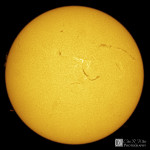 A couple of months ago I posted a white light image of the Sun captured by using a solar film placed over the front of a camera lens to protect the equipment (and my eyes) from the damaging effects of the suns intense light.  This method works very well for visual observation and basic imaging of sun spots, but does not allow for capturing any of the more dramatic details such as the surface texture, filaments and prominences.  Ever since those first imaging sessions where I shot white light images of the sun I became determined to capture more than these simple sun spot images.

To capture the more captivating aspects of the sun specialized equipment must be used.  For the image featured in this post, I acquired a basic solar telescope that filters out and blocks the entire spectrum of light other than a very narrow range of Hydrogen Alpha.  By eliminating the majority of the spectrum these details come into view.  The telescope I used is the Lunt LS50THa B600, and the camera a monochrome ZWO ASI 290MM.  This camera is a high resolution video camera capable of capturing over 80 frames a second.  This is important because when viewing the sun, a turbulent atmosphere blurs the details, but by taking thousands of images in a very short amount of time, the best and cleanest images can be selected and combined to reveal some amazing details that could otherwise not be captured and shared.  It took over a dozen different mornings to produce an image that I was ready to share.  The capture and editing of this data has proven to be a huge challenge, but despite the frustrations, I love learning new methods and techniques of photography.

The sun in Hydrogen Alpha:

Surface: The surface of the sun is a roiling sea of boiling gas known as the photosphere.  This visible layer has a granulated texture and temperatures range from 5,000 to 15,000 degrees F.   Interestingly, if you travel away from the sun it actually gets hotter for a small distance, with the layer between the photosphere and chromosphere ranging from 15,000 to almost 1,000,000 degrees F.  Of course, this is nothing compared to the temperature of the Sun’s core where Nuclear Fusion occurs and a temperature of 27,000,000 degrees F is reached.

Prominence:  Right now the sun is in a relatively inactive part of its cycle, with fairly tempered prominences or eruptions of gas and flames.  These prominences reach out thousands of miles from the surface of the sun, although the largest on record is estimated to be at around 500,000 miles in length.  These eruptions are simple beautiful to see through a specialized solar scope, but are very difficult to capture with a camera due to the relatively dim presentation next to a much brighter surface.  By restricting the Ha range even more with the addition of a specilaized solar filter these would be easier to capture, but until I purchase one, I will continue to find the exposure balance between the surface and this feature to best capture both.

The following image is a mosaic composite of six panels, as the sensor of my camera is not large enough to capture the entire Sun in one image.  Each panel consists of the 30 best images of 500, for a total of 180 images chosen out of 3,000 and compiled to create a single image that shows the entire sun with surface detail, prominences and filaments all together.  This is called a false color image, as it was captured in monocrome and color added during processing.  Unfortunately, traditional RGB cameras do not play very well with Ha telescopes, and imaging in monochrome yields the best results.

Be sociable and share! If you enjoyed this, please support my site and share.
Tags: Ha, Hydrogen Alpha, The Sun