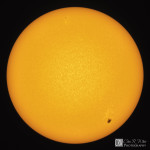 I cannot believe that it has been five months since I have been out with my camera!  The last time I really photographed anything  was back in November when I imaged Messier 33, The Triangulum Galaxy.  Since then, work has gotten in the way of play.  As soon as the Christmas season was over I refocused on the maple sugarwoods, as a strong El Nino not so subtly hinted at a mild winter.  With the chance for early season thaws we had to be ready much earlier than normal, and sure enough our first big sap run came during the first week of February.  With only short periods of down-time, we boiled right through the 15th of April.   I cannot remember a sugaring season where we boiled for ten weeks straight.  Despite the long and intense sugaring season, I won’t complain, as it was a bumper crop and we produced a record amount of syrup!  Now that sugaring is behind us I hope to spend more time outside under the stars photographing the coming season of deep space objects.

In the case of the photograph contained within this post, I was not actually under the stars, but rather, under The Star.  It is easy to think of the sun as something greater than just a star, but the fact of the matter is, the sun is simply a star, albeit a very close star.  At the center of our solar system, the sun is quite possibly the most important ingredient for life on Earth.  The sun’s rays warm and energize our planet, and without it, Earth would be nothing more than a barren frozen rock hurtling through space.

The sun is located about 93 million miles from Earth.  Most of my subjects in the sky are located thousands or millions of light years away from Earth, but this one is only 8 minutes and 19 seconds distant, when traveling at the speed of light.  It’s diameter is about 109 times that of Earth, and it’s mass is over 330,000 times that of Earth.  The sun accounts for over 99.8% of all the mass contained within our solar system.  Simply put, it’s really really big.  Currently the sun is classified as a G2V star and at 4.6 billion years old is around middle age.  It is estimated that after another 5 billion years the hydrogen fusion at the sun’s core will end and it will change into a red giant star expanding dramatically in size encompassing the orbits of Mercury, Venus and possibly even Earth.

When observing and photographing the night sky I am always awed by the size and scope of the universe above.  It is difficult to fathom how wide or distant a light year is, let alone thousands of light years.  A light year is the distance in which light can travel in one year at 186,000 miles per second.  To put this in perspective (if possible), one light year is equivalent to the distance around the circumference of the Earth, 240 million times.  While the sun is infinitesimally  small when compared to the larger features found in the night sky, it is still far to large to put into meaningful perspective.  For example: Every second, through nuclear fusion,  700,000,000 tons of hydrogen is converted into 695,000,000 tons of helium and 5,000,000 tons of energy (gamma rays).  And this process continuously chugs along for billions of years!  If that isn’t enough to overwhelm you, think about the temperature of the sun.  At it’s core it is 26,000,000 degrees fahrenheit, while Lava for comparison, is only a mere 2,000 degrees.  I suppose this cocktail of material and reactivity is necessary to generate it’s output of 386 billion megawatts of power.  By the way, the output of all 440 commercial nuclear power plants here on Earth only put out a collective 380,000 megawatts of power.

To the naked eye (DO NOT LOOK AT THE SUN WITHOUT PROPER PROTECTIVE LENSES) the sun appears as a featureless and intense white/yellow/orange disk in the sky.  In reality, the sun is far from this, however special equipment is required to reveal the treasures hidden on and around it’s surface.  Unfortunately, at this time I do not own a special Hydrogen Alpha telescope to allow me to see the more stunning features such as prominences, filaments and flares, but with some basic filtration one can at least reveal some surface detail and sunspots.  The sun is an ever changing and evolving canvas and I hope to spend more time exploring it once I have the proper equipment.

WARNING: NEVER look directly at the sun through binoculars, a telescope or with your unaided eye. Serious eye damage and even blindness can result.  To capture these images a Baader Astrosolar visual film was used to protect my eyes and my camera equipment.

Be sociable and share! If you enjoyed this, please support my site and share.
Tags: Solar Photography, Solar System, Sunspot, The Sun