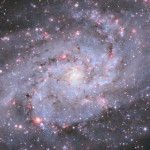 This galaxy is quite possibly the most challenging deep space object I have photographed to date.  The actual camera capture was not unlike any other object I have photographed, and it was quite easy to locate and compose.  Achieving optimal exposure duration was not particularly a challenge, and I was able to take images across two nights with 200 and 270 second exposures respectively, with the galaxy prominently displayed in the resulting camera captures.  What made this deep space target so challenging for me, was the technical scope of the processing of the data to extract the details locked within the final integrated image.

Messier 33 (M33), known as the Triangulum Galaxy is located within the constellation of Triangulum.  It is a very large galaxy in the night sky measuring over 70 arc-minutes which is over twice the width of the full moon.  M33 belongs to 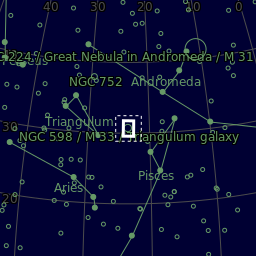 the Local Group of galaxies which consists of more than 50 galaxies, including our own Milky Way.  Triangulum not only appears large in the night sky, but is actually the third largest galaxy in the local group, smaller only than Andromeda and the Milky Way.  M33 is a classic spiral galaxy believed to be composed of over 40 billion stars.  While this number sounds astonishing, it is significantly fewer than the Milky Way at over 400 billion stars and Andromeda at nearly a trillion stars.

The spiral arms of M33 span a distance estimated to be at 60,000 light years, meaning that light emitted from stars at one extreme of the galaxy takes 60,000 years to reach the other.  Like all distances in space, everything is relative, and 60,000 light years is a relatively short distance when compared to the 3 million light years that M33 is from earth.  To put all of this in perspective, the light from our sun takes only 8 minutes and 20 seconds to reach Earth.  No matter how you look at it, it is difficult to fathom that the light captured by my camera a few nights ago was actually emitted from this galaxy 3 million years ago!

The Triangulum Galaxy was discovered by Charles Messier in 1764 and classified as a Messier object with the designation number 33. While Messier is credited with the official discovery, he was not the first astronomer to actually discover it’s presence.  Giovanni Battista Hodierna, an Italian astronomer, is believed to have discovered The Triangulum Galaxy over a hundred years before Messier. It was not until 1926 however that Edwin Hubble proved that M33 was actually it’s own galaxy and distantly located far outside of the Milky Way. Prior to Hubble demonstrating this relationship, there was much debate as to whether M33 was simply a great nebula within the far reaches of our own galaxy.  Edwin used classical Cephid stars to definitively determine the distance of M33, as well as Andromeda to prove that they were indeed distant galaxies.

The spiral arms of Triangulum are densely packed with hydrogen-alpa (HA) emission nebula which appear as magenta blotches.  These HA regions are areas of extremely active star formation.  The largest and most intense of these is designated NGC 604, and according to NASA, if it were as close to Earth as the Orion Nebula (1300 light years instead of 3 million), it would be the second brightest object in our night sky second only to the full moon.

What made processing this image so challenging was that I had to push the limits of the data to reveal the blue and lavender color tones along with the red emission zones while at the same time preserving accurate star color.  I also found the background around the galaxy to be particularly challenging.  Initially I thought I was dealing with strange color and light gradients, which is noticeable by examining the dark band of space that runs through the center of the image through the galaxy.  Above and below this dark band is an area that appears slightly brighter.  The more I worked with the data, the more I began to believe that it wasn’t a gradient and that it was actually Integrated Flux Nebula (IFN).  As it turns out, I was correct.  In my image, with only five hours of exposure this stellar medium of dust particles appears as a lighter smudge against a dark backdrop.  With many more hours, this IFN would begin to take on more definition and be more easily recognized for what it is.  Perhaps at some point, I will revisit this target and try to do just that.

While this image was the most challenging for me to make, it is also one of the most rewarding.  I had to push the boundaries of my current editing skills and learn new techniques to get the most out of my data.  For me, one of the most rewarding aspects of astrophotography is that I am constantly learning new methods of image capture and learning new ways to process the images to get the most out of them.  I am fascinated by the cosmos and the more time I spend exploring them with my camera, the smaller I feel our presence is in the grand scheme of things.  There is no way that our relatively tiny speck of space dust is the only refuge for life.