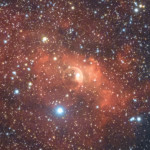 Get up close and personal.  For the longest time, as a wildlife photographer, I have been striving to get as close to the subject as I can.  I have invested in lenses with long focal lengths to provide me with the ability to “zoom” in, and tried to perfect methods of “sneaking up” to get as close as possible to fill the frame with my subject.  For me it was all about getting that close up portrait where you could, for example, count the hairs on the head of a moose, or discern the details in an eye.  Photographers of many genres are obsessed with getting close, and while there is nothing wrong with this approach, it is easy to forget that a subject is part of the world that surrounds it.  In recent years, as I have matured as a photographer, I have begun to appreciate the environment more, and have been making a conscious effort to include this natural world with my subject.  To me this presentation is more appealing, and while the close up portrait certainly has it’s place, I am more moved by an image when there is environmental context with which to gain perspective.  This same concept applies to astrophotography, where we can  for example, “zoom out” when photographing a particular subject to include the setting in which it lies.

My wife and I live to the north-west of Burlington, Vermont, which allows me a very nice dark sky view to the north and west, with the south-east being muted by light pollution.  This means that throughout the year, I generally wait for about two months to photograph an object after it has begun to rise on the eastern horizon.  This allows for the object to pass out of the light pollution bubble of Burlington to afford me a clearer view.  During those two months, I am treated to many images of these same objects by fellow astrophotographers who take advantage of these gems earlier in the season.  One such object that I have been waiting for this fall, is the Bubble Nebula.  I have seen many spectacular images of this object this season and almost all of them have been taken with very long telescopes to get as close a view of the nebula as possible.

The Bubble Nebula, designated NGC 7635, is an emission nebula formed by intense stellar winds of ionized gas that are emitted from a massive star designated as SAO 20575.  This massive star has a magnitude of 8.7 and is believed to be 20 to 40 times larger than the Sun.  The winds push the 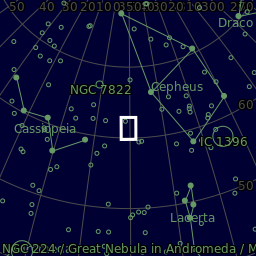 surrounding gas forming an apparent sphere which is illuminated by the star within.  This unique stellar pearl is set against a molecular cloud of red hydrogen gas.  Surrounding this emission is part of the massive dust clouds of the Northern Milky Way, containing subtle emission and dark nebulae when all combined convey ironically beautiful earthy tones.  Discovered in 1787 by William Herschel, The Bubble Nebula lies within the constellation of Cassiopeia appearing to be dead center between Cassiopeia (The Queen) and Cepheus (The King). It is believed that the central star of the bubble, SAO 20575, will eventually explode into a Super Nova.

Just recently, the Bubble Nebula has reached that point in the night sky for me when the view is minimally impacted by light pollution, and as I prepared to photograph it my plans unexpectedly changed.  I had envisioned using my longest focal length lens to create my own close up shot of the Bubble when inspiration struck.  I decided that not only did I want to photograph the bubble nebula, but also I wanted to include whatever surrounded the bubble, with the goal of applying an environmental context to the main subject.  So I did just that, photographing the bubble nebula at 420mm of focal length to get close enough to easily pick out the bubble, but with a wide enough view to nest it within it’s surroundings.

Also of note in this image are two additional deep space objects.  To the upper right of the Bubble is Messier 52 (M52) and to the lower right at the bottom of the frame is NGC 7538.  M52 is a small star cluster with an estimated 109 members, and it’s densely packed stars allow it to stand out from the rest of the starfield.  It was discovered in 1774 by Charles Messier and is believed to be between 3,000 and 5,000 light years from earth.  NGC 7538 is an area of emission nebula which, interestingly, contains the largest protostar yet discovered.  Estimated at 300 times the size of our solar system, this protostar represents an early stage of star formation as massive clouds of gas contract, a precursor to nucleosynthesis.  Essentially, a protostar looks like a star, but the core is not yet hot enough for the process of fusion to occur.  NGC 7538 is estimated to be 9,000 light years from Earth.

Truthfully, going into this, I had no idea what surrounded the Bubble Nebula, and as I began to collect images I was delighted to find that there were subtle tones and colorful ripples throughout the frame.  Convinced that I was on to something, I decided to stick with my new plan, and for two nights I collected four minute exposures hoping that when combined they would reveal a vast expanse of beauty beyond the Bubble.  The result below represents almost five hours of total exposure collected on two consecutive nights.