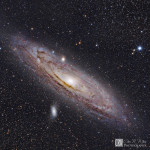 The night sky is full of amazing objects that unseen by the naked eye come to life with long camera exposures, but very few produce a sense of scale and significance as powerful as that of the Great Galaxy Andromeda.  Spanning three degrees of our night sky, Andromeda is six times wider than our full moon, making it the largest galaxy in apparent size as seen from Earth.  It is the closest large galaxy to the Milky Way, and perhaps one of it’s most remarkable features is that it is a large spiral galaxy, just like the Milky Way.

Andromeda Galaxy, cataloged as Messier 31 and NGC 224, is located within the constellation of Andromeda.  It is estimated to be about 2.5 million light years from Earth, and to contain up to 800 billion stars, more than double that of the Milky Way.  Over the centuries, exactly what Andromeda Galaxy is and how distant it is have been matters of great debate.   In 964 AD, Persian astronomer Abd al-Rahman al-Sufi described Andromeda as a small cloud.  Eventually, it became a common belief that it was not a cloud, but rather a Nebula, and in 1764 was labeled as The Great Nebula in Andromeda or M31 by Charles Messier.

In 1864 William Huggins observed that the spectrum of M31 was inconsistent with that of gaseous nebula and noted that it was more aligned with that of individual stars.  He therefore concluded that the object was stellar in nature and not in fact a nebula.  In 1887, Isaac Roberts took the first long exposure images of M31 from his private observatory in Sussex, England.  These long exposures allowed the spiral composition of M31 to be seen for the very first time.  The implications of this discovery were ultimately misinterpreted, and because it was still a common believe that M31 was a nebula, Roberts concluded that it was simply a spiral nebula in which the birth of solar systems occurred.

It was not until the “Great Galactic Debate,” of the 1920’s between Shapely and Curtis that we fully realized the implications of Andromeda.  Shapely believed that the Milky Way Galaxy encompassed the entire universe, while Curtis believed that it did not, and that there were objects external to that of the Milky Way, and that Andromeda was actually an external galaxy with the dark lanes resembling the dust clouds of our own Milky Way.  The great debate raged on until 1925 when Edwin Hubble settled it once and for all by discovering extragalactic Cepheid variable stars which allowed for a more accurate measurement of distance.  With the Milky Way estimated to be only 100,000 light years across, Hubble determined the distance of Andromeda and demonstrated conclusively that this object was not a collection of stars and dust within our own galaxy, but that it was an entirely separate galaxy located at a significant distance from our own.  (Wikipedia)

An interesting element to this photograph of Andromeda, is that it is extremely difficult to determine visually which edge of this tilted edge on spiral galaxy is actually closer to us.  Consider the two compositions below.  In the first image, North is to the bottom-right of the image, and it would appear that the dark lanes in the spiral is closer to us than the faint spiral edge at the top of the galaxy, while in the second image with North to the upper left, the dark lanes appear to be farther away.

It would appear that Andromeda Galaxy is actually on a collision course with the Milky Way.  Currently, Andromeda is drawing nearer the Milky Way at about 68 miles per second, however because it is currently 2.5 million light years away, there is no immediate risk associated with this impending galactic collision. At this current rate it should take about 4 billion years for the two galaxies to merge.  What happens at that moment in time is unknown, although it is theorized that the two galaxies will form a single massive elliptical or disk galaxy.  I plan to be ready with my camera to document the collision, so please check back in 4 billion years, plus a little time for editing, to see the results.

For me, this is one of the most thought provoking objects in the night sky.  It truly illustrates just how vast the universe is and how minuscule our little rock is in the grand scheme of things.  When taking in the night sky, I often wonder if there are beings out there looking back at us, and seeing that this amazing galaxy, so similar to our own, yet so distance makes be want to believe that the likelihood of this is very high.  Perhaps there is even someone or something in Andromeda photographing the Milky Way, wondering the same thing that I am… “Is there someone out there looking back?”

Be sociable and share! If you enjoyed this, please support my site and share.
Tags: Andromeda, Andromeda Galaxy, Astrophotography, M31, NGC224