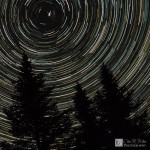 One of the great benefits of visiting remote areas such as the North Maine Woods, is that there are very few people, allowing you to connect with nature in a way that you simply cannot do when surrounded by the hustle and bustle of civilization.  A side effect of being remote, is that there is a lack of human-made light sources to pollute and drown out the night sky.  Perhaps, it would be better to make the statement that a side effect of a concentrated human population, is that there is an abundance of human-made light causing there to be a diminished view of the night sky.  In the North Maine Woods, there are no light pollution side effects from the street lamps, headlights and yard lights of towns and cities, just as nature intended.  Looking up at the night sky from such a remote location is actually quite overwhelming.  There are millions of stars visible to the naked eye, and the complexity of the night sky particularly along the dust clouds of the milky way is nothing short of truly captivating.

As a photographer, sometimes I suffer from only seeing the world through my camera lens.  Trying to execute a vision by capturing it just right with the camera can be quite a distraction from actually experiencing the wonders of the scene in front of you.  Over the last several years I have been trying to make a conscious effort to pause while out with my camera, to put it down and just live in the moment.  While standing under the night skies of the North Maine Woods, I had no trouble forgetting about my camera and just experiencing it.  I could literally just lay down on my back and stare for hours, for the entire night, at that jeweled canvas.  A truly dark sky is like nothing you have ever seen.  The significance of it’s vast depth and the infinite possibilities that it contains adeptly conveys one’s own insignificance in the grand scheme of things.  I am sincerely humbled standing underneath it.

I live in a “yellow” zone, when viewing a light pollution map, which is somewhere right between a truly dark sky and the glow emitted by a big city.  A “yellow” zone is not great, but could be much worse.  In my zone, knowing exactly where to look, I am just able to barely make out the Milky Way on a moonless night.  If I stare really hard, I think I can see the great rift of the Milky Way that runs north from Scorpius and Sagittarius; but that is debatable. From the dark skies of the North Maine Woods, the Milky Way practically jumps right out of the sky.  It is stunning.  With only a single thirty second camera exposure the brown lanes of dust powerfully emerge to flank the great rift.  Looking closely at the image, even the subtle red hues of emission nebula are visible.  To top off this amazing sight, an occasional shooting star would light up the sky as a meteor burned up upon entering the Earth’s atmosphere.

Our cabin looked out over the marsh, and in between kayak outings we would spend hours sitting on the front porch watching life on the wetlands pass by.  During these times I experienced an incredible sense of relaxation, with my only trouble in the world deciding when would I grab my gear and head out over the water.  This peaceful existence experienced on the front porch was not limited do daytime hours, and extended well after sunset and into the night.  We were lucky to have several clear nights during our stay in the North Maine Woods, and were really able to enjoy the night-scape around us.  As if this location were not idyllic enough, loons would serenade us all night as we gazed up at this marvelous sky.

Be sociable and share! If you enjoyed this, please support my site and share.
Tags: Landscapes, Night Sky, North Maine Woods