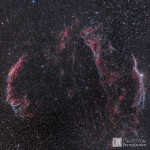 A few nights ago I was able to enjoy the clearest and darkest skies we have had since mid-April.  It was clear as a bell with minimal atmospheric haze, and only a quarter moon that did not rise until almost 2am. The only detracting elements that I had to contend with was light pollution from nearby Burlington and swarms of ravenous mosquitoes.  I was planning on photographing a part of the sky surrounding the star of Sadr in the constellation of Cygnus, however the skies were so nice that I decided instead to photograph a very challenging deep sky area that contains the Veil Nebula Complex. For this, the conditions were perfect.

Located about 2,000 light years from Earth, The Veil Nebula Complex is a combination of of seven objects that surround Star 52 Cygnus, found within the eastern wing of the constellation of Cygnus the Swan.  What makes these deep sky objects such a challenge to photograph is that they are composed of very faint wisps set against a backdrop of dense star fields.  It is particularly difficult to capture the finer details of the subtle strands of webbing that appear to connect the nebulae with one another.  Dark skies are certainly essential for photographing this target.

The Veil Nebula Complex is a very unique looking object in the night sky that is called a supernova remnant.  What you see is all that remains after a supernova event from between five and ten thousand years ago.  During a supernova (star explosion) an immense amount of energy is released, estimated at equal to the amount of energy that a typical star will emit over its entire lifespan.  A supernova can be caused in one of two ways: By the sudden re-ignition of nuclear fusion of a compact star (large mass with a small radius, but not a black hole) or by the gravitational collapse of the core of a massive star.  These stellar explosions are incredibly violent, driving a shock wave deep into the stellar medium surrounding it that sweeps up the remains of the star along with any interstellar space debris, dust and gas.  The shock waves heat up this material causing it to glow which renders it’s wake through space, visible.

To the right is NGC 6960, also called the Witch’s Broom.  It appears to include a bright star called 52 Cygnus, however they are not related to each other and just happen to be lined up with one another, with 52 Cygnus only being about 200 light years from Earth.  NGC 6960 was discovered by William Herschel in 1784.

In the Center of the Veil Nebula Complex is Pickering’s Triangle, designated as Simeis 3-188.  The faint wisps above and to the left of this are NGC 6974 NGC 6979.  Simeis 3-188 was discovered in 1904 by the Scottish Astronomer, Williamina Fleming.

Be sociable and share! If you enjoyed this, please support my site and share.
Tags: 52 Cygnus, Astrophotography, Cygnus, NGC 6992, NGC 6995, Simeis 3-188, Supernova Remnant, The Pelican Nebula, The Veil Nebula